I have had this bridge in mind to do for some time, having noticed its deterioration from the nearby Lancefield Road for some time. It looks rather sad, sitting out there in the middle of a bare landscape.

I have also been lusting after a drone to do aerial footage of these bridges, and finally the opportunity came to do both together. The drone arrived and I spent some time practising with it, and as soon as I felt I could fly it sufficiently, off to Bolinda Creek I went.

I identified the nearby Bolinda Vale homestead as being the probable owner of the property, so I paid a visit and was given permission to use a gate onto the old ROW to drive right up to the northern abutment of the bridge.

It was, unfortunately, a dull, drizzly and windy day, so I managed to get a couple of still shots done, but not get the drone in the air. So I sat in the car for over an hour, waiting for the drizzle to stop. Eventually it eased and I was able to get a couple of flights in, the result of which you can see below. These aerial views will become a feature of future coverages.

The bridge was built with the Lancefield line in 1881, and is 64 metres long with 14 openings. It was the stated reason for the line being closed in 1956, due to heavy repair work being necessary while the line was not seeing much use. This likely means that the bridge has not had any repair work on it for over 60 years. Sadly this shows, the fourth trestle from the northern end has taken a decided lean to the east, and this appears to have happened only in the last couple of years. No-one seems to have any interest in repairing the bridge, so it may come down all by itself in the not too distant future.

View Across the bridge deck from the northern end. 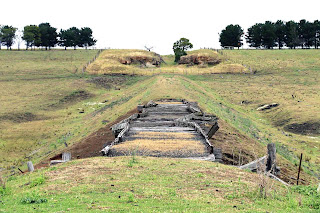 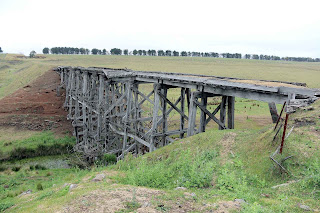 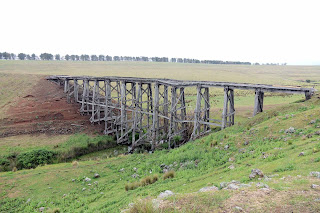 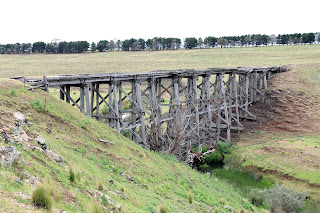 Email ThisBlogThis!Share to TwitterShare to FacebookShare to Pinterest
Location: Australasia