Sadly, on the way home from the last expedition to Barwon Downs, Timboon and Warrnambool, the old Falcon wagon began to give up its ghost. It had served me well, but was now labelled with that dreadful description "uneconomical to repair". It took me some time to save up the readies to replace it, and the (low) target was reached in late March, with almost the exact same car, but 8 years younger and white instead of silver.

A fortunate turn of events enabled me to get a new camera at the same time, a lovely Sony A7R Mark II, a full frame format mirrorless type with 42 Gigglepixies and a nice Zeiss zoom lens.

So now armed with the new camera and a hopefully reliable car, I set off in early April to visit a long-time friend up at Tocumwal, with the aim of snaring him into helping me cover the bridges on the now-closed Numurkah to Picola line.

The line was opened in two stages, from Numurkah to Nathalia in 1888, and Nathalia to Picola in 1896. The line is 20.5 miles long, and was eventually closed in December of 1986, so was only in operation for 90 years.

The first three identified bridges simply amounted to culverts over irrigation channels, so I elected not to visit them, but then there were 5 more substantial bridges, four of which continuously crossed Broken Creek.

The first bridge over Broken Creek is at the 11.6 mile point, and I was rather surprised to find a well constructed bridge of steel spans supported by concrete piers and abutments, that would later turn out to be the same for all 5 bridges. This bridge is 75 Metres long.

Armed with the array of equipment, Ray and I set out to explore the first bridge and he was given the task of measuring the length with the wheeled measuring device. Roughly half way across the bridge, Ray decided to enter into an enterprise bargaining meeting over wages and conditions. I told him that there were no wages, and the only condition was that if he properly measured the bridges, he would get a lift home. A bargain was struck when I agreed that a pub and lunch would feature in the working day. It is hard to get good workers these days.

This view shows the bridge on the west side looking back towards Numurkah. 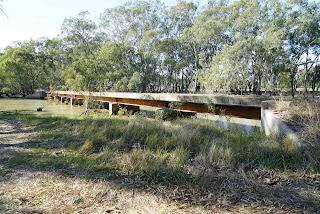 The shed in the foreground houses a pump that feeds a large boom sprinkler in a neighboring paddock. Broken Creek flows into the Murray in the Barma Forest, and is quite high. In fact I wonder at why Broken Creek is called a creek, it appeared to have all the attributes of a river. It is wide, full and much larger than other creeks I have known, and in this area seems to provide an important source of irrigation water. 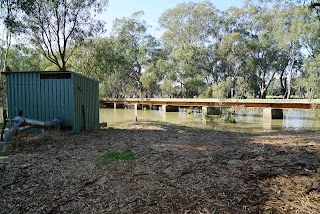 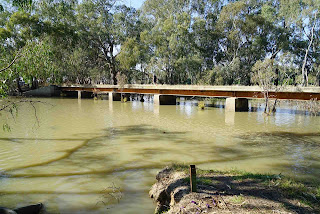 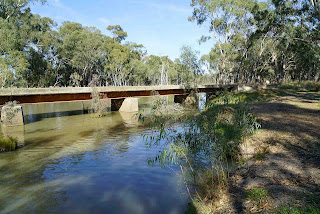 The bridge is used by vehicular traffic, this road being on the old ROW and heading west towards the next bridge, less than half a mile away. 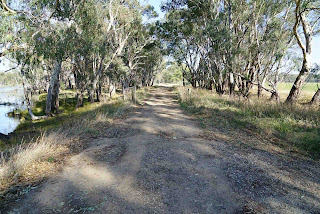 View looking upstream from the bridge. 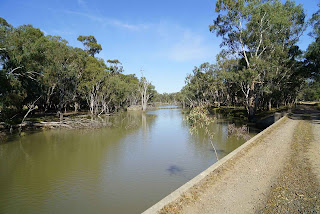 And the corresponding view downstream. 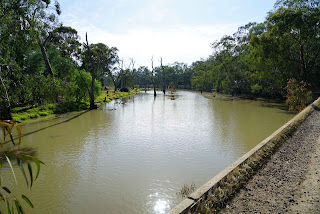 Looking across the bridge, again towards the west. 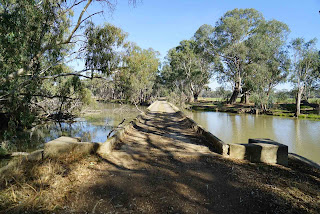