This is another of those hidden gems that was revealed by a careful poring over Google Maps. I missed photographing this bridge when I made the trip to Casteron in December of 2015, although I had speculated that it existed before then. It was not easy to find, as the imagery was not good at the time.

While the imagery is still quite indistinct, the fact that the railway crossed the Wannon River was a strong clue. This time around, I took the opportunity to travel on to Wannon.

The bridge is a good 100 metres long and is in relatively good condition, although it is not advisable to walk over it as sections of the deck are rotten. Newish cross braces on the bridge indicate that it received repairs in September/October of 1958, as shown in the photos.

On the lead-up to the bridge, the track ballast seems to consist predominantly of crushed volcanic rock, rather than the usual granititic rock.

The bridge can be accessed by driving north up the Wannon - Nigretta Falls Road from the B160 Glenelg Highway. A short distance up the road, as it gently curves right, the bridge can just be seen straight ahead, about 100 Metres from the road. If you wish to walk to it, you should consider that I encountered two snakes along the ROW. If you keep driving past the curve for about half a kilometre, you will see where the ROW crossed the road, and this is the best place to start from, walking back to the west along the ROW.

I walked to the bridge, only to find that the battery in my camera was flat, so had to go back to the car. I then discovered that the spare battery was also flat. I am normally better at keeping batteries charged than this, and so I paid the price of being on-site wthout a camera. I then remembered that I had my phone on me, and that saved the day.

Not wanting to meet up with the snakes again, my second trip from the car to the bridge was done through the farmer's paddock on the north side. For safety reasons, I always wear heavy, long rubber boots when out in the bush. 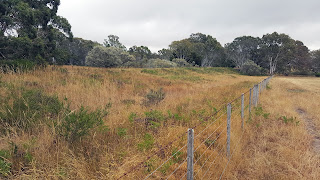 Eastern approach to the bridge, photographed on the northern side. 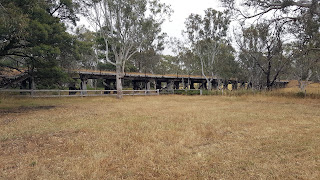 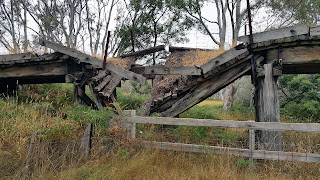 The collapsed section in the second span from the eastern abuttment. 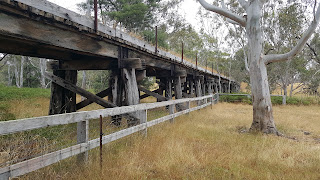 View along the bridge on the north side. 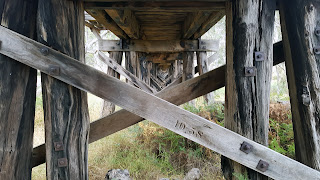 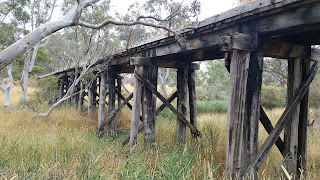 View closer to the middle section over the river, from the south side. The bridge is quite tall in the middle over the (dry as a bone) Wannon River. 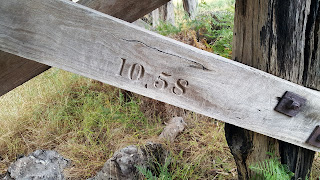 Marking indicating that this brace was replaced in October of 1958.