The bridge over the Tanjil River was only about 1.2 kilometres north of the La Trobe River Bridge. The track was carried between the two bridges on a slightly raised causeway, crossing the Tanjil River on a wooden bridge, then across the river flats on the northern side for approximately 150 Metres. At the end of the bridge section, the line entered into a deep cutting before emerging onto the more or less flat section on the other side of the hill. Near the peak of the hill, the original Moe to Walhalla Road crossed the track by a wooden road over rail bridge. The bridge section consisted of 29 openings of 20 feet, plus one steel span of 40 feet.

There is not a lot to be seen these days, although I was prompted to visit the site by Darren Hodges providing a photo taken in the early 1990s. In this photo, the bridge is almost gone completely, the cutting having been largely filled in, as you can see to the left. However the bridge railing is still visible along with the posts. The nearest post is a datum post, and is still there today, see next:


This photo was taken today, and I framed as near as possible to the original. Note the Datum post still in place. Now there are only two posts left in the ground, but the rails have been removed for safe-keeping and are stored on the road to the right side. I am told the rails will be placed back in position in the future.

But a lot more has changed, most notably the house in the background has been replaced by a newer dwelling. Interestingly, it is still in the hands of the same family, the grandson of the previous house owner is now living in the new house with his family. They were very kind in allowing me access to their land to photograph the bridge remains. The land around the cutting has been tidied up and even more of the cutting filled in. In fact, you really cannot see any trace of the old cutting anywhere.

The roadbed in both photos is the original Moe - Walhalla Road, now diverted to the right side of the old road and at a lower level. 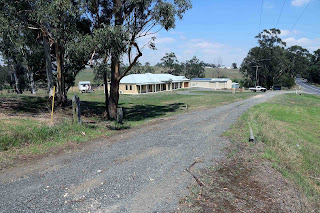 A closer view of the datum post, clearly showing its age. Note the slots where the bridge rails were fitted. 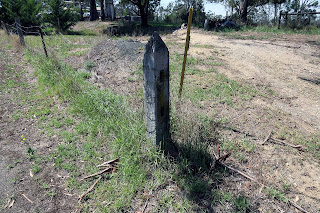 A view looking down the line of the missing cutting. 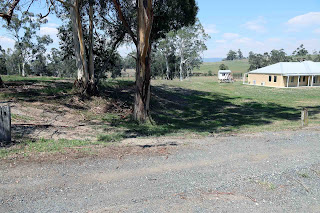 View from what would have been the northern end of the bridge across the river flats. The inclined posts of the fence going towards the river are in fact the western side piers of the bridge, now utilised as a fence. 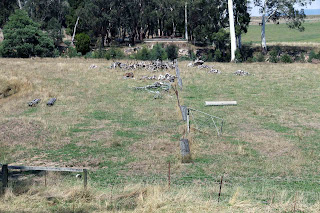 Down at river flat level, the bridge piers heading south towards the Tanjil River. 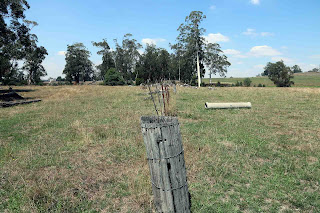 At the river itself, a view across at the bridge abutment on the southern side. 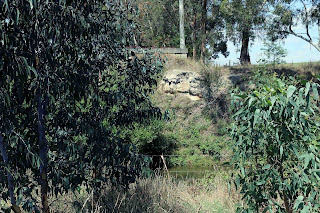 From the southern side of the Tanjil River, looking back towards the house. Just visible in the river is the concrete footing of one of the bridge piers, then the line of piers in the distance. 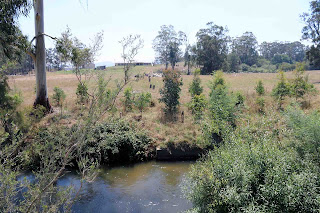 Here is another of Darren Hodge's photos from the 1990 period, taken in the same direction as the above photo. However the original farmhouse is there, more of the piles are evident and you can just see a little more of the filled in cutting.

The aforementioned pier footing in the river. 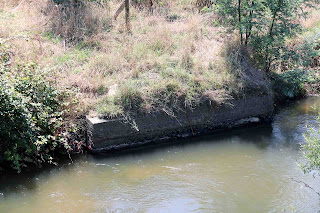 Looking south along the causeway towards the La Trobe River bridge. The objects in the foreground have nothing to do with the bridge. The family who own this land are/were associated with the nearby Moe Abattoirs and bought the ROW some years ago and have used it to store excess equipment from the meatworks. There is still a lot of this machinery stored further down the causeway. 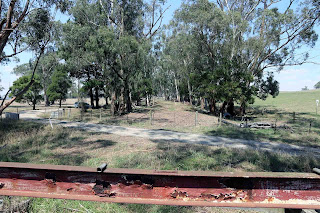 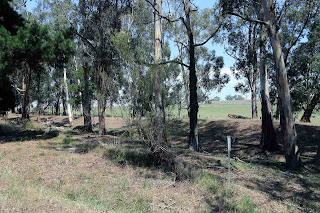 The following group of photos come from the book by Stephen Watson, "Walhalla Railway Bridges". They show the Tanjil River bridge as it was when the line was running. 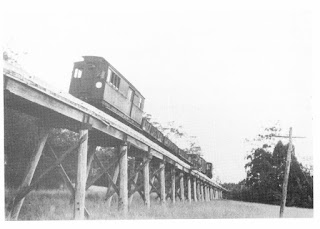 Looking South from the Farmhouse area towards the river. 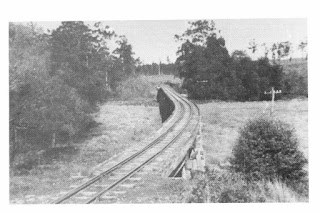 Taken on Western side showing train heading towards Moe, the Na locomotive is over the steel span. 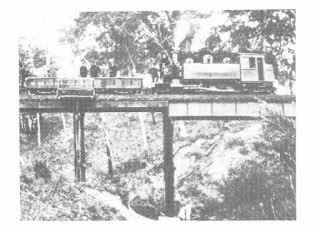 A train also heading towards Moe, in much the same position as the previous photo, except it is taken on the East side of the bridge, looking West. 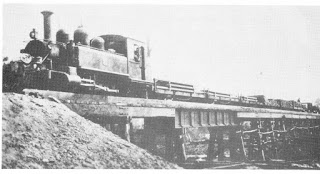 Looking towards Moe, taken from the North East corner. 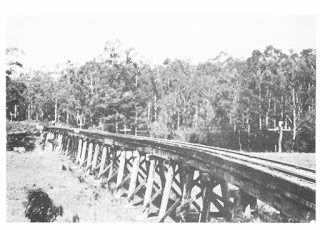 The Road bridge over the line, just North of the farmhouse. Looking towards Moe (yet again). 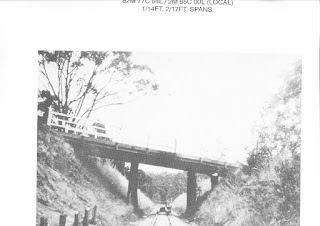