Bridges near Thomson on the Moe Walhalla Railway

Finally, back bothering bridges again after a lengthy period of trying to tend to business. I had developed a very large backorder and at the same time, there were lots of chores to do around the farm. But it is mostly under control now, so off I went.

Today I travelled to Thomson on the Moe to Walhalla Railway, to look at two bridges just on the south side of Thomson. These bridges were timber piers with iron spans, one bridge on a curve with 7 openings and a straighter bridge of 5 openings, closest to Thomson. When I refer to the number of openings, these are the iron spans only. The Walhalla Goldfields Railway refers to these bridges as bridges 9 and 10, although the logic in this is puzzling, as normally bridges are numbered from the start of the line, while these bridges appear to ignore that convention.

Darren Hodges had photographed these two bridges back in the 1990s when the bush was not as thick as it now is, and I wanted to see how they fared today. This is a map of the bridges:

The Thomson Station precinct is shown in the green shaded area, with the two bridges highlighted in red and blue. They are only a very short walk from the station. For safety reasons, a track has been built around the bridge sites, and upon examining the area, I could not find any trace of the 5 opening bridge, marked in red, Bridge 9. It is possible that someone more adventurous could have bashed their way through the undergrowth, but I don't take chances like that these days. I could see down from the foot track to some extent, but could not see the bridge at all.

The larger 7 opening bridge, bridge 10 is still intact, but almost impossible to get good photos of due to dense undergrowth. 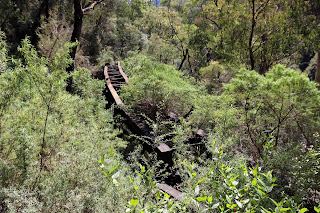 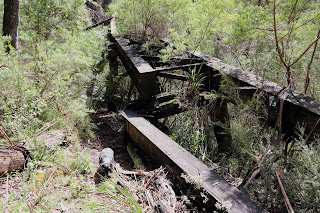 Georgia the Gunzel Spaniel is again out and about with me, having just been down the hill and back again, more capable than I. One thing I noticed is that the nearest iron span has had the cross braces cut by gas torch, this is why the left beam, near Georgia, has dropped. Apparently this was done back in the 70s or 80s in order to stop trail bike or 4WD people from driving across the bridges. 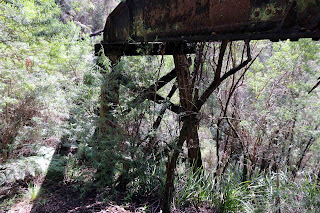 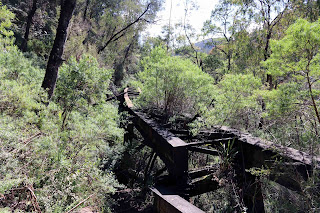 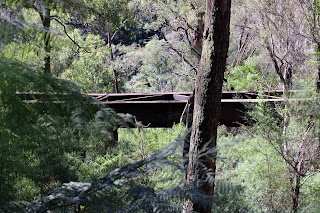 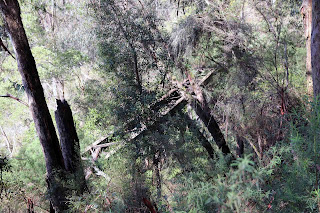 The next two shots show what may be the iron spans from the apparently missing 5 opening bridge. They look very much like the ones on the 7 opening bridge, and co-incidentally, there are 5 of them stacked up in the WGR yard at Thomson. According to the WGR web site, bridge 9 has been removed, so it is a fair bet that these are the iron spans from that bridge, safely stored for the future. 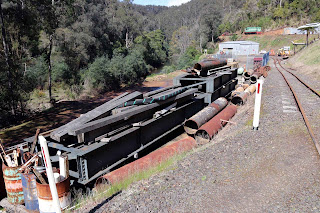 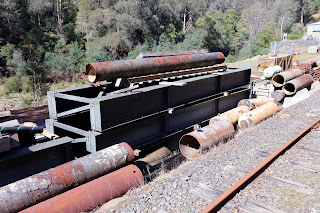 Finally, a set of seven photos taken by Darren Hodges back in the 1990s when the bush was not as dense.

I think the above photo shows the shorter 5 opening bridge, #9, the one I could not locate.