Finally managing to get away and explore bridges again, Georgia the Gunzel Spaniel and I set out on January 26, Australia Day, heading for Victoria's South West. The plan was to spend two days shooting the bridges at Barwon Downs, then Timboon and finally Warrnambool.

We were graciously being accommodated by friends on their magnificent property at Wongarra, and that provided a welcome chance to enjoy the beauty of their property, the coast and their generous hospitality.

The target bridges are on private property at Barwon Downs, on the former Birregurra to Forrest Railway. The line opened in June of 1891 to provide access to the timber in the Otways and also to service the farming communities in the area. The line closed in 1957 and the rail was lifted. As it has lain disused for the better part of 60 years, much of the infrastructure is long gone.

But, as usual, the well built timber bridges are still in place, although somewhat worse for being abandoned.

Upon arriving at Barwon Downs about 9:00 AM, the first task was to identify which property the bridges were on and try to obtain permission from the property owner to cross their land to get to the bridges. Typically, this was not easy as it turned out, the larger bridge sits neatly in the corner of three properties. I managed to get permission of one landowner on Wickams Lane, the second owner referred me to the third and the third was not at home.

In the end, it worked out that the best, and safest route to the bridges, was to park near where the railway used to pass under Wickhams Lane, and walk south west down the old ROW to the bridges. The area looked ripe for Joe Blakes, so Georgia was left to look after parking the car. She managed to find a good place with a view of chickens. She likes chickens...

The first bridge you come to is the larger of the two, over a swampy section of the Barwon River West Branch. It consists of 11 openings, most of 15 feet. It is in quite good condition really, it would only require a new deck and rails in order to carry pedestrian and cycle traffic over it. The main structure is quite solid. 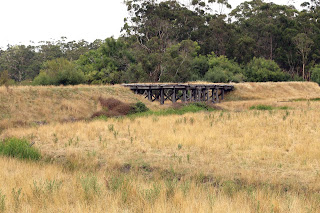 The first photo sets the place of the bridge in the landscape, taken looking south east, with the river at the right end. 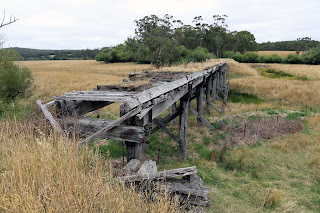 The North end of the bridge, looking towards the river. 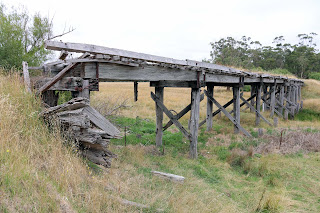 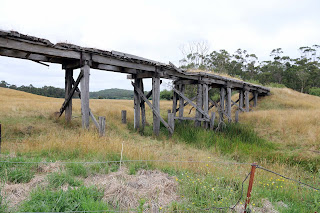 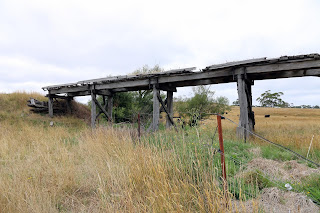 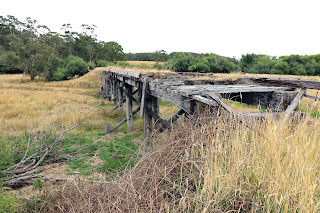 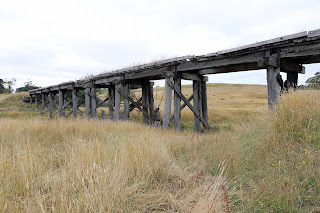 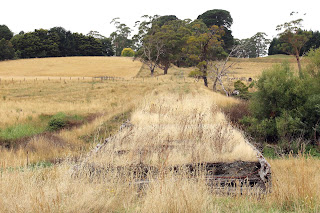 Looking north from the south end of the bridge, towards the cutting.

The second bridge is quite a lot shorter, being only 5 openings, but it spans the Barwon River West Branch proper. It is surprisingly low, and I would imagine would catch a lot of loose timber debris when the river floods. It is also not in as good condition as the larger bridge, two of its piers having sunk into the river bottom substantially. 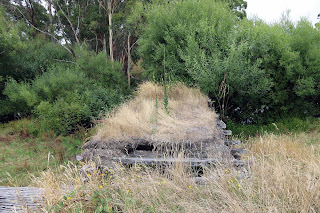 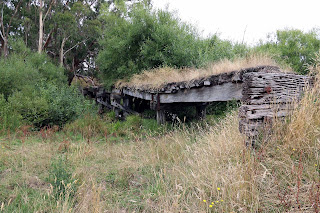 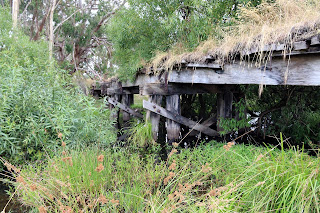 This shot clearly shows the river and how close it is to the bottom of the bridge deck.

There is a move to extend the Forrest - Birregurra Rail Trail over this section, but it is being strongly opposed by landowners in the area.

Walking back to the car, I travelled north east up the ROW, which just north of the bridges, passes into a cutting where Wickams Lane crossed the line, with a timber road-over-rail bridge. The site of the bridge has been filled in, but some of the remains of the original road bridge can be seen stacked on the ROW at the entrance to the cutting. 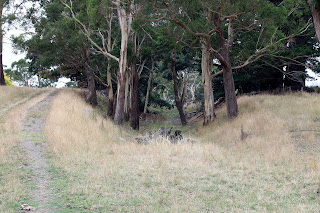 Looking north up the cutting, the old road bridge timbers in a pile in the foreground.