This bridge crosses the Merri River near Dennington, an outer western suburb of Warrnambool, on the former Port Fairy line. The bridge would have been constructed in approximately 1890 and the line closed finally in 1977. The rail was retained and still exists from Warrnambool to the Fonterra factory at Dennington, the remainder being lifted.

At the point where the line crosses the Merri River, a section known as the Hopkins Basin, the river is approximately 45 metres wide. The bridge itself is approx. 175 metres long, the number of openings being unknown as a 50 metre section of bridge has been removed over the river itself.

I have to say I was disappointed by this bridge, it looked large and impressive in all the glimpses I got of it, both in the flesh and via Google Earth, but on arriving there it was not all that special. Having been nobbled by the removal of a large section, and the remaining part was heavily fenced off, making any decent exploration hazardous, and the vegetation surrounding it guaranteed to harbour snakes, I was unimpressed.

A lovely man in the house where the line crosses Farnham Road North, has been mowing the ROW for ages, and so it is perfectly possible to drive a car down it to reach the bridge, although his wife did warn me about tiger snakes in the long vegetation. Georgia the Gunzel Spaniel was keen to explore, but I thought it unwise, and instead I sent her off to KFC to get us both lunch. She likes chickens....

So I must apologise for the shortage of still shots, however I hope the aerial footage gives a better idea of what the bridge now looks like. 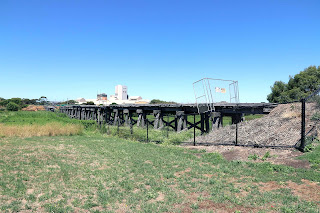 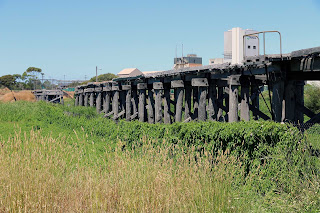 A closer view, note the lush undergrowth, very long, wet, swampy and full of snakes. The Fonterra dairy factory can be seen in the background on the eastern side of the river. 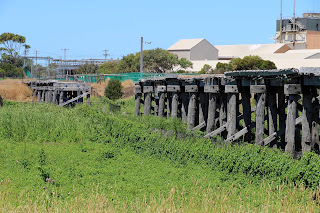 And the video of the bridge. As always, it is best viewed full screen and in the highest resolution you can get to work. It has been uploaded in 4K.