The Timboon Railway Line branched off the Warrnambool or Port Fairy Line a short distance west of Camperdown. It was roughly 36 kilometres in length, opening in 1892 and closing relatively recently in 1986.

I love this bridge, it looks good, and sits beautifully in the landscape, something that is best appreciated from the air, hence my use of the drone to get a rather magic aerial perspective. And it is hard to take a bad photograph of the bridge, as it manages to look great from almost any angle.

The bridge is 185 metres long, with 30 openings, and is in very good condition considering its age. It now carries the Camperdown -Timboon Rail Trail across the valley, and has been sympathetically restored by adding a simple transverse timber deck and safety railings. The spans are a uniform 20 foot, with a rare and very unusual arrangement where 4 pile piers are interleaved with two pile piers with stay piles on the outside. This makes the bridge even more unique and attractive. 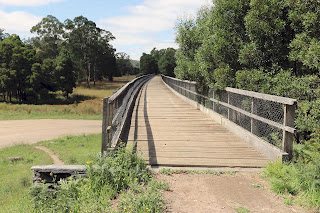 Shot from the northern end of the bridge, looking towards Timboon. 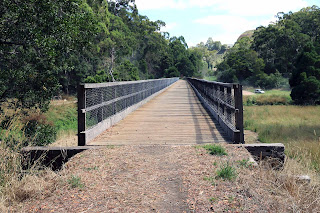 The complimentary view, from the south end looking north. 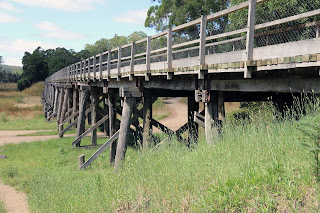 Two views from the north-east quadrant. 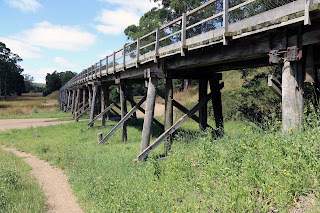 View from the east side, showing Limeworks Road passing under the bridge. 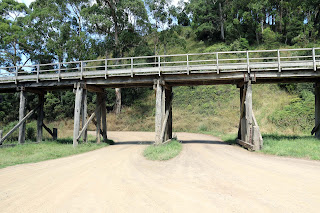 View from the south bank of the river looking towards Timboon. 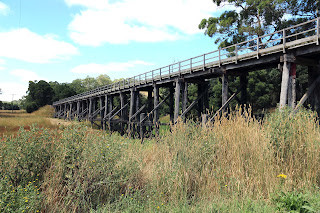 Three views of the river crossing. There is a small concreted ford at this location, part of which is seen in the last photo. The Curdies River is quite prone to flooding, given the massive rainfall in this part of the Otways, so clearing debris away from the bridge piles is a constant task. 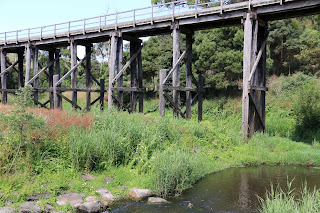 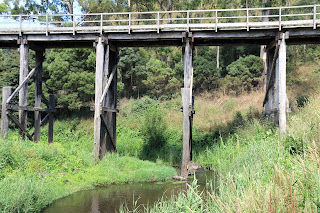 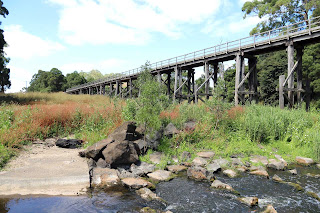 And here is the video clip of the bridge, in glorious 4K if you have that capability.