This bridge probably sets the standard for bridges on this line. The Lilydale to Warburton Railway was constructed in 1901, and, as such, is a relatively late addition to the Victorian Railways Network. The Lilydale to Healesville Railway had been opened in stages, with the first section to Yarra Glen opened in May of 1888.

There does not seem to be any evidence that I can find, of timber being used for bridge construction, with the sole exception being the road over rail bridge near Woori Yallock. But that bridge only carries a road, not the railway. Perhaps wherever the rail line is carried over a bridge, the construction may have been brick or concrete piers with steel spans from the outset.

I would be interested to know if anyone has knowledge of the bridges being replaced in later years. I rode this line when traveling to Powelltown via Yarra Junction in the early 60s but I don't recall taking much notice of the bridges at the time.

Bailey Road is un-made and the area is very dusty. To the east of the span over the road is Stringybark Creek. The bridge is quite tall, approximately 4 meters to the bottom of the steel span. 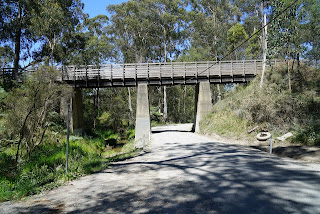 View taken from the North side of the bridge, looking South. Stringybark Creek is under the left span. 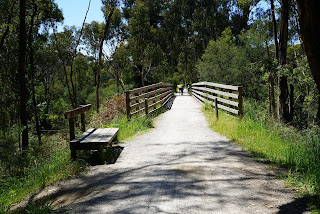 The bridge deck, looking to the East. The young lady holding the horse at the far end had, quite wisely, dismounted and walked the horse across when no-one else was on the bridge.