Historical photos of Mount Evelyn in December of 1961 and January 1962, taken by Michael Brudar. These photos are used by permission of Michael, as I may appear in one or two from time to time. In point of fact, I was a bugger of a photo-bomber, popping up when not expected.

Michael and I haunted this station and surrounding districts, as we were not yet able to drive or ride a motorcycle. But we did very soon after. We used to ride the goods trains and travel up to Yarra Junction and Warburton with our bicycles in the Z van.

Michael had a very nice 35mm camera, used to take these shots. I did not have a camera at the time, so I used to amuse myself by getting in shots where I was not wanted.

If you would like to see more of Michaels photography, see his Flikr Page Sadly, Michael passed away a couple of years back. Knowing he only had a certain amount of time, Michael set about scanning his photo collection and putting it up on Flikr. 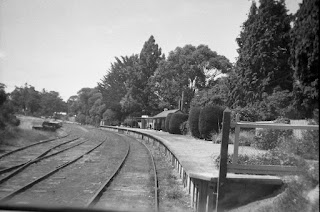 Mount Evelyn Station viewed from the West end, looking East, in December of 1961. 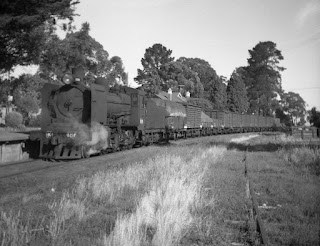 A Down goods headed up by K188, which was stationed at Lilydale for a long period of time. Michael and I were about to climb on this goods for the trip to Warburton. The Station House can just be seen behind the wagons. 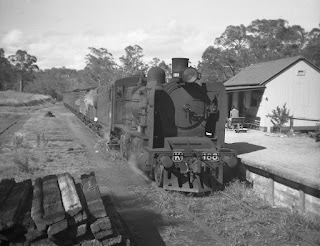 Michael has this photo placed at Mount Evelyn, however I believe it is actually Seville, as it is not on a curve like Mount Evelyn. I can be seen, with my back to the camera, seated on a luggage trolley. I was chatting to the Engine Driver.