This is a seriously impressive bridge, and I may be doing it an injustice by calling it Bridge Number 4, as it is described in the book 'Wooden Wonders' by Don Chambers, as Latrobe River No.2.

In any event, the bridge was in a parlous state a short while ago, as revealed by this aerial photo from Google Earth:

The section pointed to by the arrow is missing entirely, 4 piers gone, and the bridge is complete un-decked. Unlike the previous 3 bridges, this one needed a lot more work to be able to use it for a rail trail. The deck has had to be added for the full length of the bridge and a lightweight inverted Howe truss section inserted to span the gap.
This bridge is 6.35 Km from Traralgon, and is 245 Metres in length. It is a transverse deck design with longitudinal wooden beams. It bridges the Latrobe River, which can break its banks under flood conditions, and also bridges an adjacent billabong. At the time I was there, we had just had a lot of rainfall in Gippsland and the river was full and fast. The billabong was also full, with treacherous currents going into it and out again. This photo shows the river on the upstream side of the bridge, with the entrance to the billabong at left of the photo. 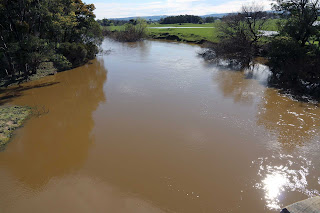 The missing section of bridge was over this billabong section and Darren reports hearing of an act of vandalism about 4 years ago when the section was deliberately burnt. The truss section sits on the remaining piers and seems to be of fairly light construction, as shown here. 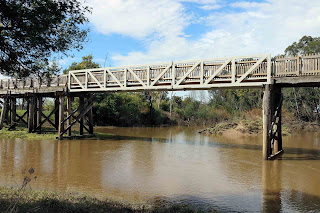 Normally the area under the bridge would be dry, but with the rains it is very full.

It is almost impossible, because of the surrounding trees to get a shot of the entire bridge, so I took it in sections. This is the first section from the Southern end: 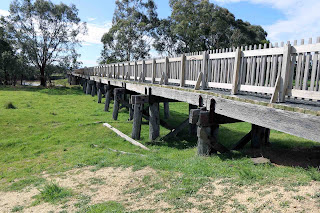 This end has had a lot of sand washed up around the piles, so quite a lot of the lower part of the piers is now submerged in a sea of sand and new grass.

This shot shows the remainder of the bridge: This is a little further along the bridge: 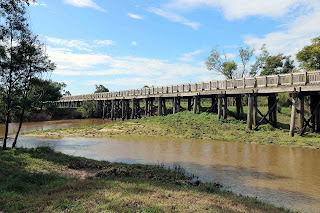 And this shows the centre section. Note the eddies around the piles caused by the swift current. 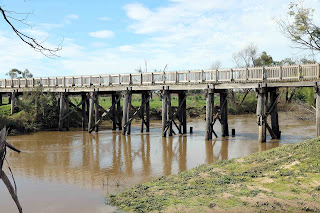 This shot is one of my usual views, but this time it reveals that the existing bridge is not straight, in fact far from it. I suspect that this is because the bridge has been washed away in the past during times of flood and each time new piers have had to be placed in a slightly different place to the damaged ones. This would be particularly true of the original piles were broken off at ground or water level and the new piles could not be driven on top of them.
﻿ 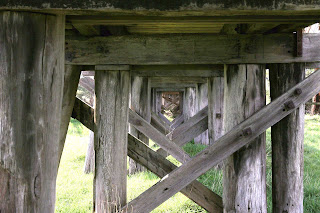 This view shows that the crosshead was placed in 1936. As well, you can clearly see the new deck above it. 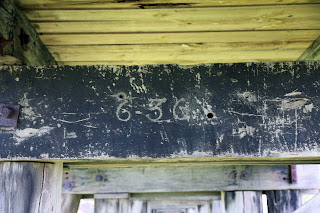