Wonthaggi Branch - Bridge Number 9 Glen Forbes. Located 21.22km from Nyora. Spanning an un-named watercourse feeding into the Bass River, this bridge has 7 openings and is approximately 50 Metres long. A unique thing about this bridge is the set of brick piers on the East side of the bridge, as if it was planned to replace this bridge before it was closed.

The bridge was immediately before the crossing of Glen Forbes road, then into the Glen Forbes station yard.

The Train Hobby Publications book, Locomotive Profile - The Victorian Railways 'T' Class, shows a photo on page 14, taken in October 1978, a few months before the line closed. In that photo, you can just see the brick piers on the far side of the bridge.

Yet another chapter in My Adventures With Wild Life. When I went to go to the other side of the watercourse, there was a small property there that looks un-occupied, as I went to knock on the door to ask permission to cross their land, but there were no curtains and the house looks as if no -one has lived there for some time. So I walked down to the corner of the garden to get a shot of the bridge, and passed a small lake in the process. There was a flock of very large geese on the lake, and one (probably male) came out of the water and charged at me flapping his huge span of wings at me. I raised my arms above my head and yelled gobbledegook at him and he retreated to the lake. Once again, I forgot to take a photo.

A wide shot of the bridge taken from the South-West quarter. The brick piers are barely perceptible. 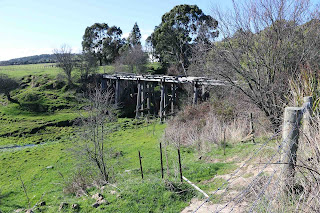 This closer view shows the brick piers a little more clearly. Like all the bridges in the region, this bridge has lost its decking timbers. 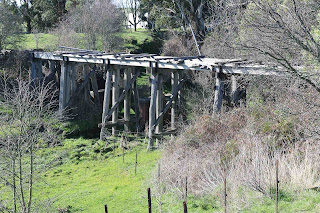 A wider shot taken from the North-East quarter. 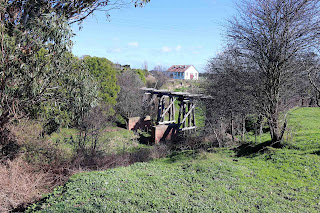 A closer view, clearly showing the brick piers. It would be interesting to know what form of bridge was planned to replace the existing one. 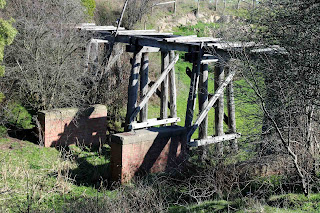