Jumbunna Embankment. Reputedly the largest earthen embankment ever built by the Victorian Railways, and when you stand on it, or its approaches, you are quite humbled by the scale of the thing. I measured it as 194 Metres long, but could not measure the height. It is not easy to get to, you have to ask permission of a landowner even to get to the ROW from anywhere. The landowner I asked to allow me to cross his land was at the nearest house, to the North East of the site. He told me there was a brick lined tunnel right through the middle of the structure to allow for drainiage, and as a child he had walked through there often. I did not go down to the bottom to find out. The locals said the fill was mostly obtained from the long deep cutting just on the Up side. This cutting is approximately 500 Metres long and as deep as 10 Metres in some places. However there is evidence of three small quarry sites either side of the embankment that probably also sourced material.

This shot, taken from the South west on the Outtrim - Moyarra Road, shows the impressive scale of the embankment in the landscape. However some of the right hand end is hidden from view. 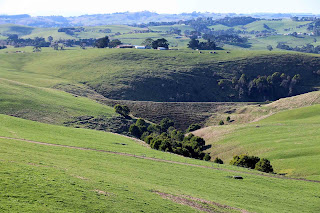 This is the Southern end of the long, deep cutting that approaches the embankment. It was not possible to get a good shot showing the size of this cutting, an aerial shot would have been better. 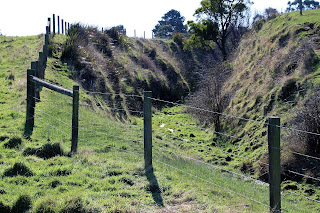 A shot of the Northern approach to the embankment, with the large cutting in the distance. The farm where I obtained access is visible to the top left of the hill. 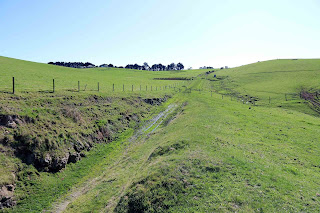 Reverse shot looking South with the embankment to the left of centre in the distance. Not too impressive from here, but wait, there is more... 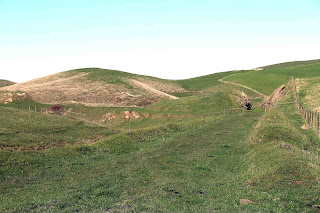 The embankment from the northern end. Sadly, this photo does not do it justice in terms of conveying the scale of the thing.. 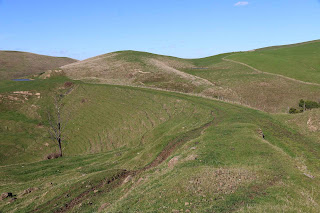 Looking over the edge of the embankment from the middle, on the South Western side. 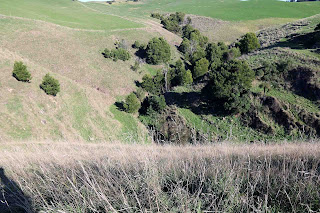 One of the small quarries used to source fill material. Sadly, some mongrel has dumped a huge load of glass bottles, just visible at bottom right. 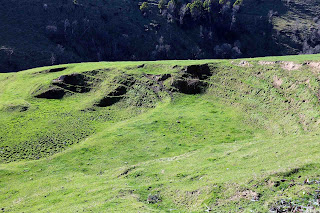 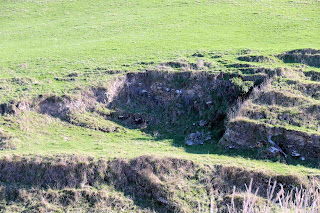 A pair of railway wheels at the North Eastern foot of the embankment. I could not get down there to measure them and find out if they were from a VR vehicle or a mining railway, but there were no mining railways near here and the  gauge looks closer to broad gauge. I suspect they may be the axle and wheels from gangers trolley. 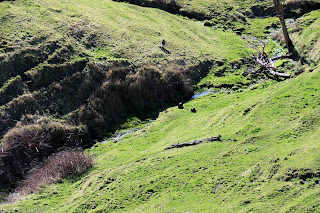 This is a more recent aerial view of the embankment, taken in July 2017. Make sure you watch it in full screen and it is available up to 4K resolution if your Internet connection can handle it.