Tooradin Station was never much of a station, more of a halt, although in the early days this was the terminus of the line before it was extended further east. But now there is little to suggest a station may ever have occupied this site. The Cypress trees are the only reminder, as they seemed to often be planted at railway stations. The bridge was about 100 metres past the station at distance 13.29 kms from Cranbourne.

There is nothing left at the former station site, just a slightly raised section of earth where the platform once stood. This shot is taken looking in the down direction towards Koo Wee Rup. 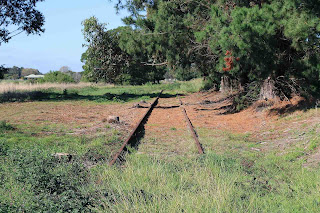 A small wooden trestle bridge over a drain at the eastern end of the Tooradin station, just before the line crosses the Tooradin Station Road. 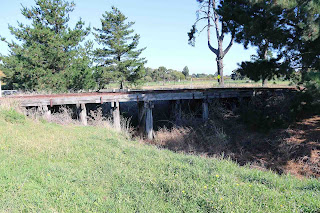