Bunyip River - A Further Brace of Bridges is another collection of bridges, this time over the Bunyip River, which at this point has morphed into its alternate name of Main Drain. They are just on the outskirts of the township of Koo Wee Rup, on the Melbourne side, at a distance of 21.04 km from Cranbourne Railway Station. There are six bridges, the first encountered is of wooden trestle construction, The next two are timber decked iron girders on concrete piers with concrete abutments, the fourth bridge, the longest, is of timber span and trestle construction with a central iron span. This bridge crosses the major waterway.

The last two are cast concrete culvert types over smaller water channels. The sixth bridge is actually across a separate drain called Boundary Drain that joins the main channel at this point.

The Victorian Blackberry Growers Co-op, AKA The Railways, have finally been spraying, but not enough to clear the tracks, A view across 5 of the bridges. 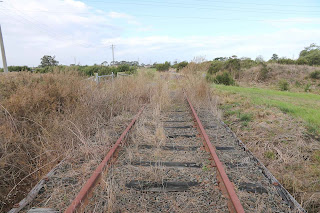 The smallest of the 6 bridges, a small wooden trestle type. 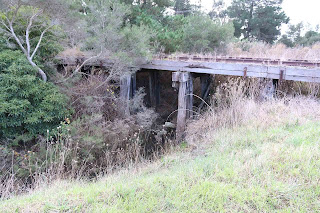 A bridge of iron girders on concrete piers with a timber deck. The sign at right of frame said Gunzels Strictly Prohibited 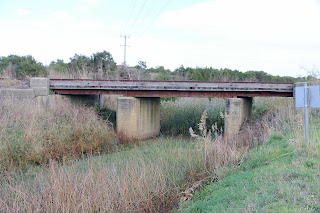 Another bridge of iron girders on concrete piers with a timber deck. 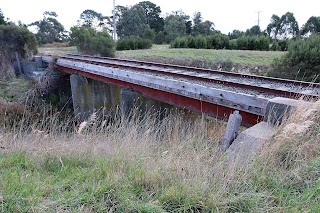 This is a the largest of the 6 bridges, mostly a traditional timber trestle bridge, but with an iron centre span. 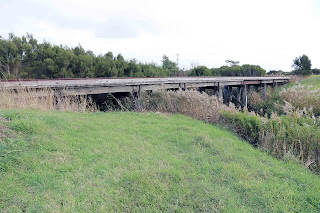 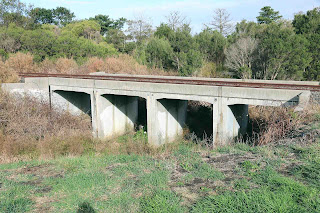 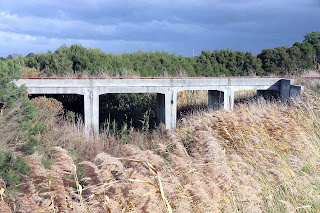